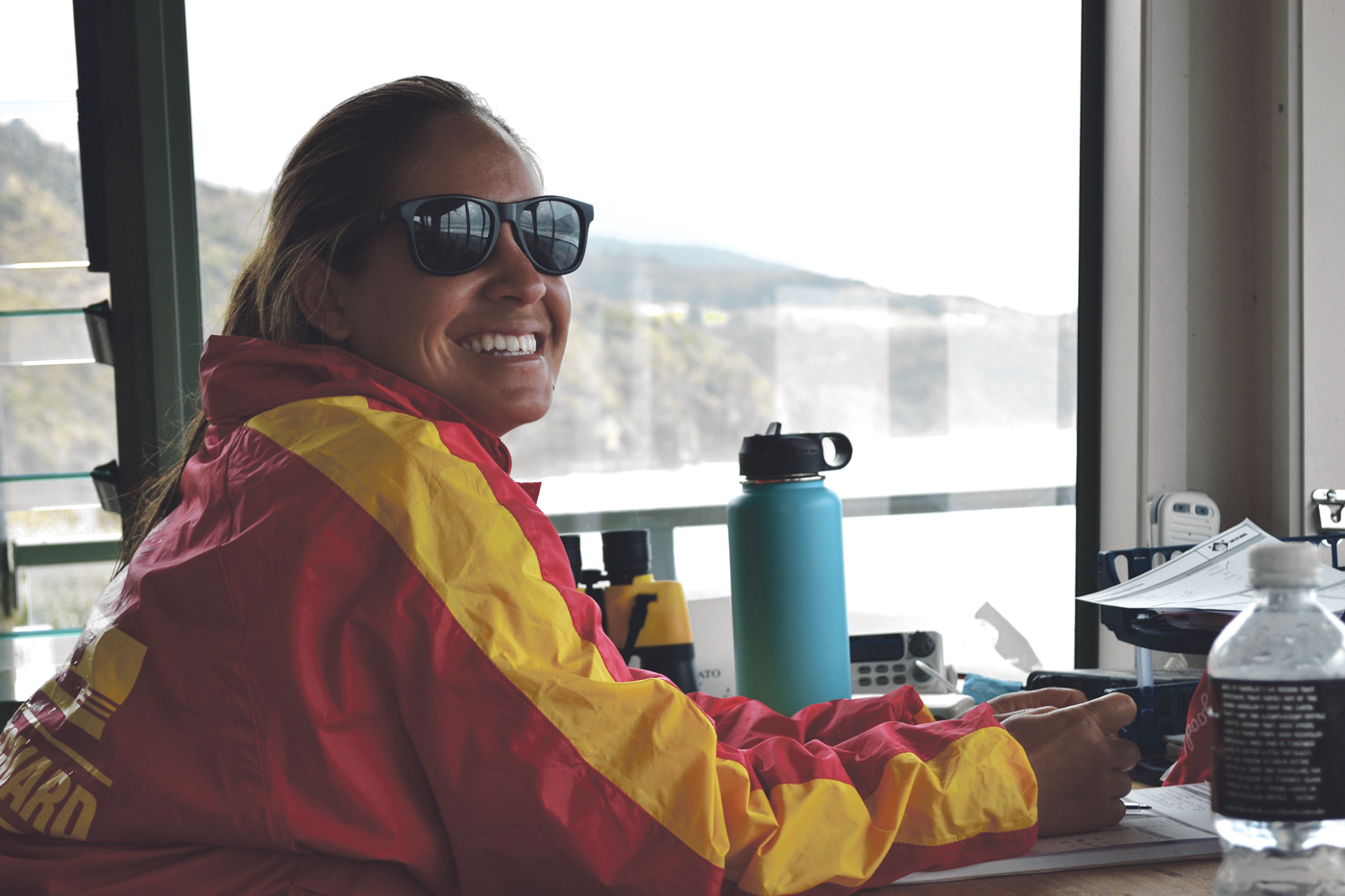 It’s not just a love of Raglan that’s kept local surf patrol captain Aubrey Shrimpton returning summer after summer from the States – there’s also her love for another lifeguard who she met seven years ago on Ngarunui Beach and wed last September.

Now the pair are looking to become “full locals”, Aubrey told the Chronicle, as she and hubby Mark Shrimpton – from across the divvy – start searching for a house to buy. “We both love the lifestyle here, based around the beach.”

After a “crazy” 15-odd consecutive summers on patrol at either Ngarunui or Huntington Beach in Southern California, where she’s from, Aubrey is looking forward this year to staying on in Raglan.

Not that she likes winter exactly. “I’m a massive wimp with the cold,” laughs the 2015 regional lifeguard of the year.

“And I’ll probably have to buy a new wardrobe now.”

She remembers enduring a couple of weeks of the New Zealand winter about the time she received her award, which was also when Mark proposed. “Oh my gosh it was painful,” she says of the below-freezing temperatures she encountered in both Hamilton and Queenstown. “I had hot water bottles and about three duvets (on my bed).”

Despite that, Aubrey’s stuck on Raglan and its small-town feel. Southern California, she complains, “is so big, so built-up”.

Aubrey started training as a lifeguard at the age of 16 while still at school in California, developing a passion for the lifestyle all through university where she did international studies and political science.

While admitting she’s not used her degree in terms of a career path, she really enjoyed the classes she took. “And I knew I loved lifeguarding.”

Having graduated, and wanting to travel, Aubrey got the first of many visas to come to New Zealand lifeguarding for a year as a friend had done.

That’s when she met Mark, on her first season at Ngarunui. He followed her back to California for a bit, then she got another visa for her second season here.

After that Aubrey was able to get working visas based on her partnership with Mark and, now they’re married, permanent residency is on the horizon.

Aubrey says she couldn’t be happier. The 30 year old’s had a dream wedding in Hawaii and – as patrol captain at Raglan Surf Lifesaving Club – finds professional guarding both rewarding and satisfying.

New Zealand has a “very different” system of lifeguarding than the one Aubrey grew up with.

For a start there are no volunteer lifeguards in the States: it’s all paid work, as is Aubrey’s job at Ngarunui from Monday to Friday.

But the biggest difference, she says, are the crowds. Back in California lifeguarding is a “huge operation” with swimmers accessing a full five kilometres of beach from many points.

So there are 40 to 50 lifeguard chairs along Huntington Beach during summer, she explains, each manned by several lifeguards. “Even on a busy day here the numbers (of people) are nothing like over there.”

And there’s no surf lifesaving flag system in the States to confine swimmers to one part of a beach. Though that makes guarding here “a lot easier”, Aubrey says, the confined swimming area is also potentially more dangerous because more people can quickly get into difficulty all at once.

“You need to be on your game … reading conditions all the time.”

Ngarunui Beach is also more dangerous than Huntington, Aubrey says, being a little more exposed to surf as it is with the harbour entrance one way and rocks the other. “There can be drastic changes from week to week.”

And these school holidays have been the most dangerous of all Aubrey’s seasons. At low tide there’s been really no safe place to swim so the flags have at times had to be placed as far north along the beach as the boardwalk.

It would’ve been “chaos” had the weather been hot, she says, and brought the crowds en masse.

Not that Aubrey’s complaining. “I just love it here,” she enthuses of Raglan from her lifeguard tower vantage point.