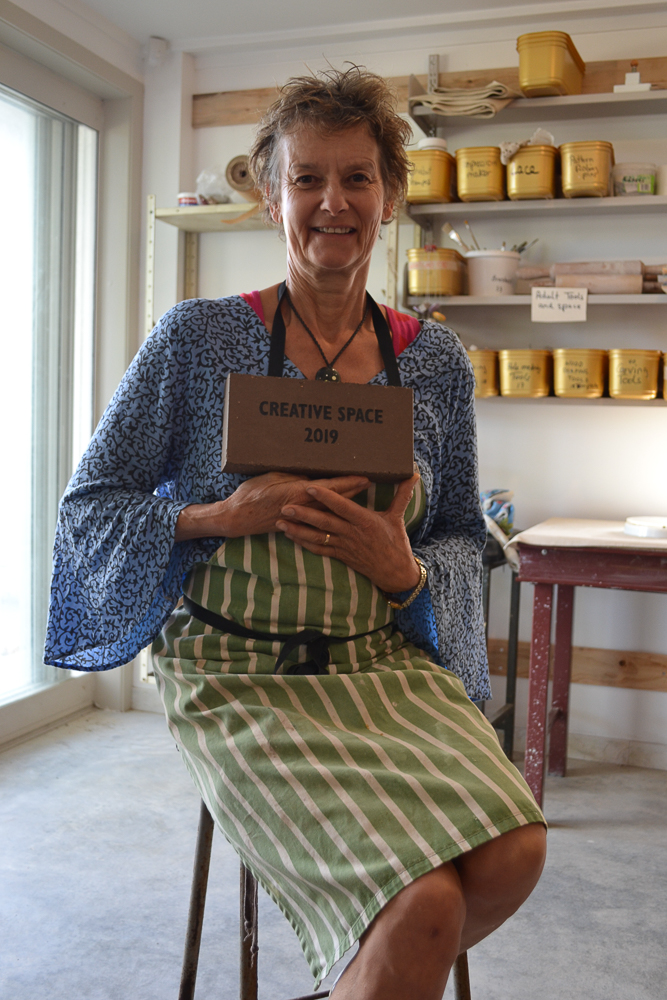 She’s always been a real brick around the Raglan Old School Arts Centre in Stewart St so it’s perhaps fitting that Susanne Giessen-Prinz is busy selling just that – bricks – in a final fundraising push to help get the new creative space finished this year.

“We’ve sold 40 but we want to sell 300,” says Susanne of the bricks, which get engraved with each buyer’s name before being used in the paving and landscaping around the new $488,000 building behind the old school.

It’s an ambitious project but Susanne – who has bought a brick herself for her grandchildren who she hopes will someday use the facility – is undeterred.

The 62-year-old onetime florist turned potter is now into her seventh year of local fundraising for the combined clayshed/creative space. Arts centre manager Jacqueline Anderson told the Chronicle “Susanne has been the key driving force behind the new creative space and provided the vision for all of us to work towards.

“Her drive and passion for a shared clay shed community space has been a force to reckon with.”

Among other things Susanne’s organised raffles, dreamt up mid winter soup(er) nights and instigated the annual Raglan Spirit of Christmas Art Show which this year raised  a record  $9000.

And most recently she’s adopted the novel brick-by-brick initiative by which Ohakune got its distinctive carrot-themed park.

While Raglan’s engraved bricks cost $300 apiece, each comes with a charitable donation receipt for tax rebate use.  For businesses the cost can be a marketing expense, and there are also sponsorship options.

Susanne admits she’s exhausted and can’t wait now to complete fundraising for what she describes as an “amazing” creative space which will soon house the clay shed and Lions op shop work area downstairs, and a performance and movie/theatre space with seating for 50 to 90 people upstairs.

However she’s encouraged by the fact that just last week Waikato District Council issued the downstairs of the building its certificate of public use, even if total sign-off for the upstairs has yet to be achieved.

Susanne insists she’s been responsible only for leading the “bottom feeder” work, which has in turn cleared the way for Raglan Community Arts Council chair Rodger Gallagher to “reach out for the really big funds”.

It all started simply enough with the need for a new “glorified” clay shed, she recalls, with one room for the kiln and the other to be used as a workspace.

But a feasibility study showed that a bigger, multi-functional space was the way to go.

While the new clay shed and the thriving pottery classes are now in a sense Susanne’s “baby”, she is quick to praise her predecessors who paved the way.

Waitetuna potter Claire Wimmer was undoubtedly the birth mother of the community clay shed, she says, while others like Hayley Hamilton and Merren Goodison have also had huge input.

She herself took over teaching the children’s clay classes when Sarah Steed got busy with her own young family. “Now there’s 40 kids this term (four classes) using the clay shed,” she says proudly.

Susanne hasn’t been teaching much pottery herself of late as there’s always something else to be done for the new creative space, like collecting by truck and recycling materials from a dismantled Waikato University building – a task that took her and hubby Andreas two full days of work.

She does though organise both clay and team-building workshops – often tutoring herself –  and is proud that all funds raised stay in the community, helping to support 20-odd artists.

As Rodger Gallagher says: “Susanne is the power plant that provides the energy and zeal needed to ensure the clay shed thrives.”