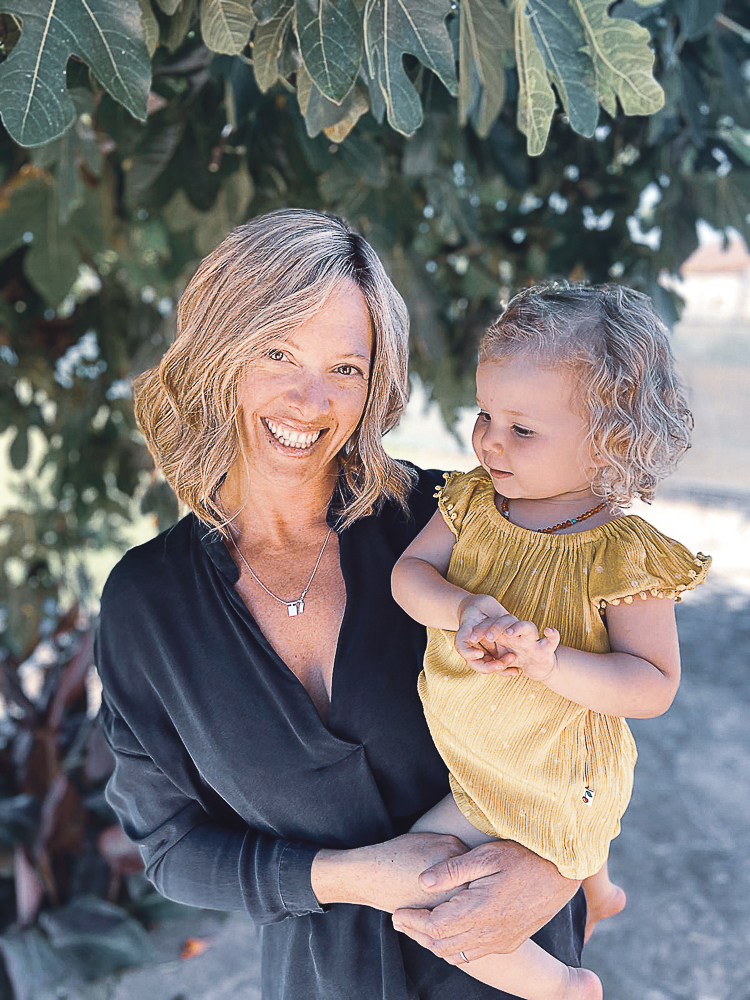 You may well remember Jesse Turner serving you at Rockit Kitchen. Jesse lived in Raglan a few years ago and made it home, purchasing a charming character cottage on Government road. During that time Jesse made some deep and profound connections with Raglan women and to this day keeps in regular contact with them.

Jesse currently lives on Mallorca, one of the four islands that make up the Balearic Islands, in Spain, with her husband James and daughter Maeve.

During lockdown local friends were updated with her news from Europe.

Jacqui from the local Rag caught up with her to hear of her experience and what helped her through her isolation.

What date did you go into Lockdown similar to our level 4. What did this look and feel like?

We woke up at home on Saturday 16th March to the news the Spanish Government were issuing a 15 day State of Alarm and that the police and army forces were under direct control of the Central Government. It was a bit of a dash to stock the house up with food and other essential items.

Children were not allowed outside the property they lived in, and the only travel allowed was for food, medical or essential work.

The airport and ports were shut.

The army were stationed in the main city of Palma doing checks on all cars, and police were patrolling the streets of every town to ensure compliance with the rules.

Straight away, huge fines were being issued for anyone breaking the law. €500 for having a child with you on the street, €1000 for being out walking with your dog – the authorities clamped down hard. It was very straightforward and the clarity was a benefit. Mallorca did not have anywhere near the infection numbers that Madrid and mainland Spain had, but due to everything being centralised, we were running with the same regulations that were in place within the entire country. It was sobering to see the figures coming out of Madrid, which I believe encouraged people to take heed of what the Government were saying.

Can you describe your lockdown experience?

My husband James runs a superyacht and  had been in the Caribbean since December and him coming home was not an option. So, it was just Maeve, myself and Arlo the dog during lockdown.

We are very fortunate in that we live in the country with a large garden. It was a constant reminder and reality check, when things felt overwhelming, to remember that there were so many people living in apartments with no access to outside at all.

My sister and her family live close by and I don’t think I would have got through with my sanity intact, without our relationship. We did manage a couple of covert missions for sleepovers, which helped us all and was great for the kids. By the time they could have freedom of movement, children had spent about 56 days at home, so any respite was healthy!

Every night at 8pm there was a nationwide show of appreciation for workers across all the public departments that were helping to hold the country together. Once Maeve was sleeping and the nights were still, it was so lovely to hear the singing and clapping that echoed through the towns. A feeling of unity amongst all, from our own bubbles.

What helped you get through?

I structured my days with lots of cooking, on-line exercise classes and activities with Maeve.

The solo time and lack of adult contact could get lonely, but I connected with close friends around the world.

I am so unbelievably fortunate to belong to the most incredible group of Raglan women, and our friendship helped me through more than I can say. We have a book club which we continued by Zoom – the wine and coffee and book chat was lifesaving.

NZ was in lockdown during April/May and we have 4 birthdays amongst my Raglan friends during that time. As we couldn’t have parties and share gifts, it was decided that we would do group virtual video gifts for each person. There was a different theme for each woman, and it was an epic thing to be a part of. I’m sure I can speak for all of us when I say that time will be remembered with joy. Those women know who they are, and I want to shout from the rooftops how fabulous they all are; how they gave me the most beautiful feeling of belonging, from half a world away.

For me it was really about slowing down and appreciating the small things.

Every day Maeve, Arlo and I would walk the small lane off our house. We walked the same route every day, but I made it a mission to find something special every time. We would find flowers, leaves, feathers, snail shells – whatever was on our path. I’d come home, arrange the days find and photograph it.

Those images will be a part of the memories of a very strange, unique moment in our history. I’ve framed them and they’re hanging in Maeve’s room.

Things in Mallorca have pretty much returned to normal now; the island has just opened up to tourists again. James finally made it home at the very end of May, so we’re a family unit again.

Will you be returning to Raglan?

With international air travel still unpredictable, it is unsure when we’ll be home to Raglan. But we’re hoping to make it back to our beautiful corner of the world sometime soon. We miss everything and everyone that makes it so special.

Taking joy in the small, simple things is something I hope we will continue to nurture, as we move forward into a world that is the same, yet indescribably changed.