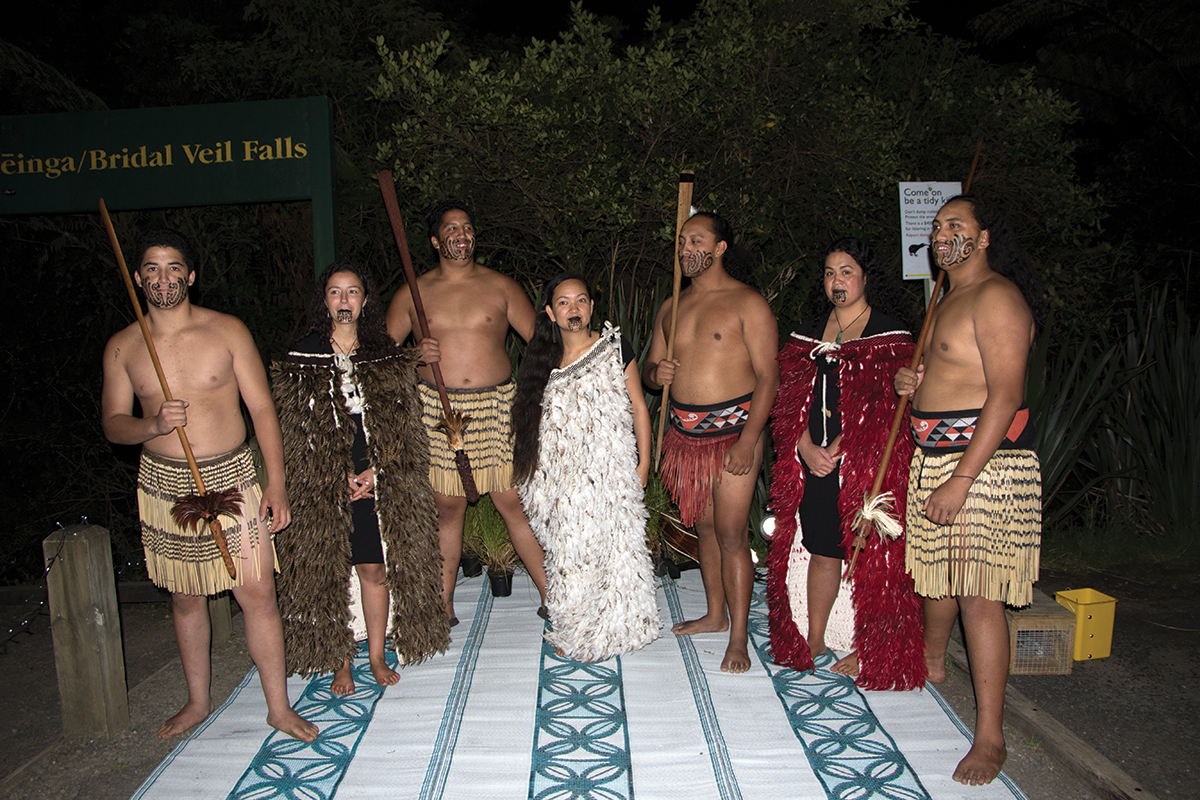 An ambitious homegrown cultural venture welcomes its first clients at dusk tomorrow (January 27th) when a party of tourists experience the Waireinga-Bridal Veil Falls’ bushtrack in a whole new light.

Visitors to the falls – ranked recently on TripAdvisor as No 1 of 32 Raglan tourist attractions – typically have been unaccompanied and have gleaned what they can from the DOC information boards there.

But now they have the option of a guided walk in which a fierce warrior battle at the spot is re-enacted, and where they get to set a trap in the bush for pest control and see an eel or two caught in the creek on the return journey through the illuminated track.

He, together with seven Maori students formerly from Raglan Area School, will guide tomorrow’s visitors from the carpark to the two viewing platforms at the top of the falls.

The visitors will hear along the way the story of Waireinga, which is the area’s original name with its own whakapapa or genealogy, Tahi says.

“It starts with a fallen tree where two chiefs had a battle,” he will say at the beginning of the tour – and at this point two students in traditional Maori dress wielding taiaha (long-handled wooden weapons) will appear from the bush.

Further down the track three more students will appear, wearing Maori cloaks made of feathers. This is where the group can share korero or conversation around such things as native birds, pests in the bush and the significance of the hand-crafted cloak at weddings and other rituals.

The focus is on the spiritual side of Maoridom and its longheld connection to the environment, explains Tahi, who farms ancestral land at Aotea and is also a DOC senior manager.

He’s researched for three years now how best to share the culture of Waireinga in an authentic way; how to “capture” tourists and bring them out to the wild west coast harbours of Raglan, Aotea and Kawhia on the well-worn route between Auckland and Waitomo Caves.

What he’s come up with is Waicliff Cultural Tours, which aligns itself with the objectives of Hamilton & Waikato Tourism Plan 2016 and which will also help his local marae financially in its ongoing environmental restoration programme.

“This business is the only cultural experience in the Waikato region,” Tahi told the Chronicle. It’s about sharing Maoritanga with non-Maori and international tourists, enhancing the Waireinga area and providing work experience for rangatahi or young people, he says.

There have been a few practice runs of the routine ahead of tomorrow’s first client group, he says, both in front of family and friends and local tourist operators. And they loved the new initiative, he reckons.

“A cultural journey is an integral part of the visitor experience,” he adds, quoting from DOC’s Waikato Conservation Management Strategy.

Tahi hopes to run the hour-long tours at least three times a week. Each would have between six and 30 clients.