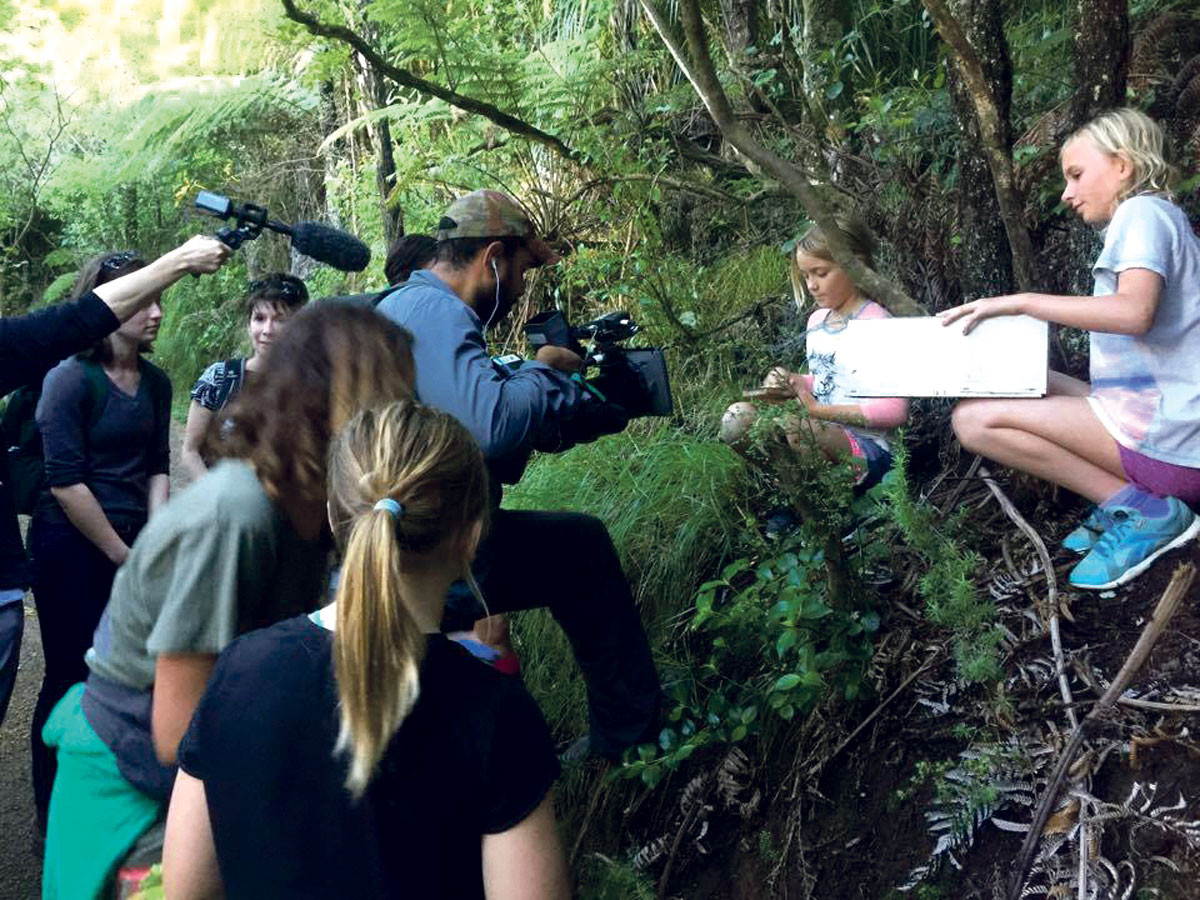 The conservation and environmental skills of Raglan children have reached across the world, with kids who take part in the Karioi Rangers programme featuring in a Canadian documentary series.

Television production company Ocean Television was in Raglan on April 18 filming part of its 13-episode Partir Autrement en Famille (Off the Beaten Path with Family), a series that explores responsible tourism by talking to the locals who respect the destination community and environment they live in.

Karioi Rangers organiser Kristel Van Houte says the film crew spent a couple of hours with the children – Taylor and Cassidy Hanna, Zara Beeby and William Millward – who “didn’t miss a beat” in showing off their skills in rat and stoat trapping and a building fire at Bryant Reserve and the beach.

“It was really cool seeing how mature and capable they were,” says Kristel, who has been running the Karioi Kids/Rangers programme for six years.

“They have the camera right in their face and Taylor is setting the trap. “William was telling how he caught two possums that morning in leg traps, and then plucked them.”

Kristel says the television production company got in touch with her after being referred by a Canadian marine biologist, Nate Glickman, who had worked as an intern on the Karioi Kids/Rangers programme.

For every different destination featured in the documentary, a new host is brought along with family members as special guests.

In Raglan they were actress Sylvie Léonard and her daughter, Camille.

“They were super-nice. It was a nice opportunity for the kids.”

The film crew also spent time in Rotorua and Tauranga, and while in Raglan also visited Xtreme Waste and Solscape among other activities.

Taylor Hanna, 9, who was a Karioi Kid before becoming a Ranger, says it was cool being filmed knowing that they are going to be on TV in Canada.

“I had to set the rat trap and show the cameraman what I was doing, and talk about it.”

Cassidy, 11, who has been involved in Karioi Rangers for about a year, says it’s “weird” knowing that they will be on TV in Canada.

“We had to walk up and down the hill a couple of times so the camera guy could film things over again.

“I don’t know if we’ll get to see it, but lots of strangers will see us on TV in another country!”

“I liked being filmed during fire lighting with the flint and steel because it’s a skill I’ve mastered in Karioi Rangers and it’s pretty cool.”

The Karioi Kids/Rangers programme equips students aged 7-13 to become independent and skilled volunteers in the Karioi Maunga ki te Moana project – to restore biodiversity from the mountain to the sea – and a wide range of conservation activities.

Kristel says the after-school programme has been running for over six years and there are students who have participated for four years. In term one this year a record number of 67 students participated, with activities such as harbour floats, surfing, canyoning and sleeping in self-made bush huts on Mt Karioi all being part of the learning experience.