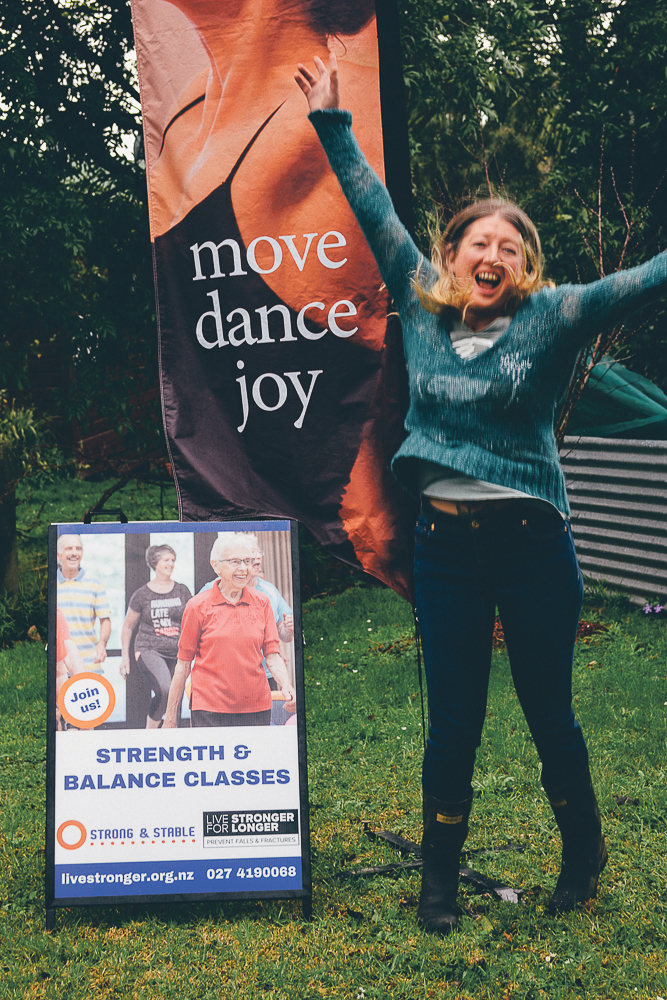 From a national longboard champ to championing the health of others … it’s been quite a ride for Raglan’s Belinda Goodwin, who was honoured this month with a Parkinson’s Volunteer Award for her “unstinting commitment” to Nia dance classes in the Waikato.

Belinda – who runs six classes a week, two of them at the Raglan town hall – was chuffed to be recognised by the charity that supports those living with the neurological condition affecting movement and coordination.

“Waikato has a real star in Belinda Goodwin,” said Parkinson’s New Zealand. “Quite simply, succinctly and with absolute certainty, she improves the quality of life of people with Parkinson’s and their significant others.”

The charity made special mention in its citation of Belinda’s “natural enthusiasm” and efforts to make her Nia classes more widely accessible over the peak of the Covid-19 crisis.

The 47 year old – who delivered a gutsy ninth placing in her division at the inaugural ISA World Longboard Championship in Peru back in 2013 – realised on going into lockdown that she needed to be able to Zoom her classes.

In particular she wanted to share what she calls her “freedom dance” for those with Parkinson’s, and her Move to Heal sessions for seniors.

“These people felt really isolated,” Belinda says, and were thrilled when she set up the latest in video communications, Zooming directly from her Sunshine Rise living room to theirs.

All they needed was a large-screen TV or laptop, she explains, then they could click on the email link she sent for each class and participate as usual. “I made it super-easy (to access).”

Thanks to the technology a number of her Nia regulars got to maintain the social connection that comes from a dance class without ever leaving their home.

Through Zoom Belinda’s also been able to welcome more converts to her Nia dance classes. These hybrid sessions combining in-person and online classes create a real buzz, enthuses Belinda, who loves the sense of wellbeing participants obviously get out of the ongoing social interaction.

Nia – which stands for Neuromuscular Integrative Action – is becoming an accepted form of therapy worldwide for the likes of Parkinson’s,  she says, because it encourages left/right brain “coherency”.

Rhythm and music trigger muscle memory in our bodies that ultimately overrides the part of the brain responsible for fine motor skills, she adds.

Belinda, who’s taught Nia for four years and is now a certified blue belt, says she realised early on there was a “really strong” market for seniors generally.

After first training in dance for Parkinson’s in Wellington, she went on last year to a Parkinson’s dance workshop for instructors in New York at her own expense so she could  – as mentioned in her volunteer award citation – “bring those learnings back to the community”.

Belinda was also recognised by Parkinson’s New Zealand for entering ‘Team Femidables’ and competing in the 2019 Tinman Triathlon which raised funds for the disorder.

Such is her passion for the cause she also organised a few off-beat occasions of her own, including a teddy bears’ picnic during lockdown. People went to a lot of trouble to make it fun, she reckons, including one Nia fan who Zoomed a teddy in via the flying fox he’d set up in his back yard.

After the success of online Nia she’s also instigated weekly Thursday night Bingo via Zoom for those who are elderly or on their own but may not be into dance moves.

She made Bingo cards online but instead of using numbers “sneakily” devised dance terminology such as ‘squish walk’, ‘outward block’ and ‘cha-cha-cha’ to play.

*Join Belinda in the town hall for Classic Nia at 9.30am and Move to Heal Nia at 11.30am on Wednesdays during school terms.